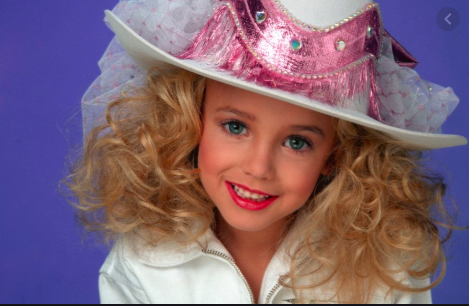 JonBenet Ramsey was a six-year-old American child beauty queen. She was found dead on December 26th, 1996 in her home, in Boulder, Colorado. Her father, Jon Ramsey, was the CEO of Access Graphics and her mother, Patsy Ramsey, an American beauty pageant winner. Patsy was walking down the steps early that morning and discovered a three page ransom note on the steps. The note prompted Patsy to call the police, though it said her daughter would be brutally killed if they contacted anyone. During this time there were suspected to only be three people in the house, John Ramsey, Patsy Ramsey, and Burke Ramsey, her nine-year-old brother. JonBenet’s body was found less than eight hours later inside the Ramsey residence. She was found in a closet in the basement by her father, with duct tape over her mouth and a cord wrapped around her neck. When she was found her father ripped off the duct tape, took her upstairs, and covered her with a blanket. A paint brush from Patsy’s painting set was used to strangle her, and there was DNA from an unidentified male found on her underwear and sleepwear. There were no footprints outside of the house and no sign of forced entry. On the ransom note was a requested $118,000, which was the amount of the bonus John Ramsey received that year. The letter was signed S.T.B.C. which lead the officials nowhere. The note that was written was said to be written inside the house by a woman with a man influencing the writing. The night before the murder the Ramsey’s had a Christmas party with hundreds of people and suspects that could be considered.

There were many people in the house the night before JonBenet’s death which gave the police many suspects. The three main suspects in the beginning of the case were her family, John, Patsy, and Burke Ramsey. It was said that Burke or Patsy were suspected to have killed JonBenet accidentally and then covered it up by writing the note and the fake strangulation. Also Burke Ramsey’s fingerprints were found on a bowl of pineapple, and in the autopsy report it was found that there was pineapple that JonBenet digested. Suspicions were that Burke Ramsey, only a child, killed his sister accidentally because she stole his pineapple. Another theory was that John Ramsey accidentally killed his daughter and made Patsy write the ransom note. The first non-family suspect in the case was a friend, Bill McReynolds who was at the house two days before her death and liked to dress up as Santa Clause. McReynolds daughter was kidnapped 22 years before which caused more suspicions towards him. He was very strange, in the way that when he went into heart surgery he brought a vile of glitter JonBenet had given to him when he played Santa Clause. Michael Helgoth was an early suspect who lived nearby the Ramsey house. When the police investigated and went to the Helgoth house they found a pair of boots that were linked to the footprints found in the basement. When they tested the shoe they found that the shoe was a match. But a little after the death of JonBenet, Michael Helgoth committed suicide.

The police investigators made many errors in the beginning of the case. One was that they left the crime scene open, which was a major factor. People were in and out of the Ramsey house and were contaminating an unidentified crime scene. The first investigator to go around the house did not look thoroughly. JonBenet’s body was not found by an official, but she was found by John Ramsey and his friend. They were told by another detective to look through the house again to see if they could find anything. The investigators did not find the broken window in the basement until years later. The evidence found in the basement, the footprint, was not tested right away during the case, which would have given them more evidence to go off of for the case. They did not immediately seperate John and Patsy Ramsey to question them, which could lead to the two talking about the case if they had been a part of the crime. The Ramsey’s had many claims that were proven false later on. For example, they told the officers that Burke was sleeping the whole time and did not know anything but the audio from the 911 call that morning had a little boy’s voice in the background. The case of JonBenet Ramsey has not been solved and some say it was because of these errors and many others that could have been fixed from the beginning.

There was lots of evidence found at the crime scene in the Ramsey house, some tested right away, other things tested weeks, months, and even years later. In the basement there were two sets of footprints tested later. One was unidentifiable and the other matched a hiking shoe the same size and style as Michael Helgoth’s. There was also a broken window found in the basement with a suitcase below it and a scuff mark on the wall. On the dining room table in the Ramsey house there was a bowl of pineapple and milk and an empty glass with a tea bag. Pineapple and milk was JonBenet’s favorite snack but on the bowl of pineapple the fingerprints matched Burke’s and Patsy’s and on the tea glass Burke’s were the only prints. In the autopsy it was reported that JonBenet had pineapple in her stomach. The pen and paper that the ransom note contained was said to be found inside the house by the murderer. There was lots of evidence at the house, but the footprint and scuff marks were not identified.

Considering all of the evidence, errors, and suspects in this case, I believe that Burke Ramsey accidentally killed his little sister. Patsy and John may have helped cover it up so the families name was not tarnished. There was a lot of evidence to suggest that Burke or any family member committed the crime. The bowl of pineapple on the dining room table suggests that Burke was awake, unlike what the Ramseys told the operator. In an interview with Burke he was showed a picture of the pineapple and the tea on the table, he was very hesitant in his answers. In the beginning of the interview he was calm and sitting still but when showed the picture he looked over it and got up a few times. He also does not answer the question fully of what was shown in the picture. Burke may have accidentally killed his sister, she was going in for a piece of pineapple that was not hers and he got angry. When she eats it he goes up behind her and hits her with his toy from the back. Burke has always been jealous of JonBenet, she was the golden child of the family and he felt left out. This pushes him over the edge and he hits her too hard on her head and kills her. He goes upstairs to get Patsy and she sees her daughter dead on the dining room floor. Patsy helps him play the whole situation as a kidnapping and puts her in the basement and stages the crime. This case though unsolved has changed many things for forensics science.