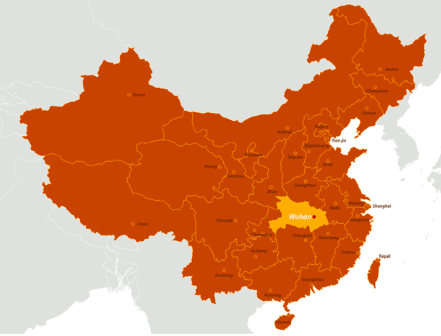 China recently discovered a new virus that started infecting hundreds and killed several people. This virus started out in Wuhan, China, a city of 11 million already infected 450 citizens and killed 20 people and rising. The virus is called the coronavirus, it was transmitted from an animal called the civet but a new strand was discovered that allowed the virus to spread through human interaction, unlike animal to human interaction before the strand. In the city of Wuhan it has been reportedly linked to a Hua Nan Seafood Wholesale Market that sells seafood and animal foods.

Other countries afraid of getting this new strand of virus have started to do health screenings to people from China to prevent the virus from spreading. Thanks to the Chinese New Year, travel is especially worrisome from tons of people leaving and going to China causing major health concerns with officials around the world. Major airlines made precautions and hired additional help for the new traveling being done and to make sure people are healthy and free from the virus.