Stranded With Nothing To Do? Join Band! 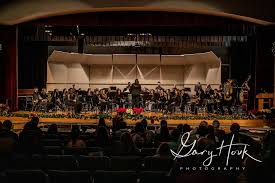 It has been over a year since Pottsgrove High School shut its doors due to the Coronavirus pandemic. With that long duration of isolation, many people have craved social interaction and wanted to invest their time in a new hobby.

Since the school is now functioning in a hybrid model now and the future’s looking bright for the school being in person full time soon, there is a hobby that may interest a few of the readers of this article due to the marriage of learning or improving a skill and the much needed socialization aspect. If that sounds like heaven to you, the band ensembles that Pottsgrove High School offers will be sure to pique your interests. There are a few different types of band that have their own eccentricities with each individual ensemble. The remarkable Pottsgrove band director, Ellie Zerefos, is always eager to have more people to join any of the band ensembles that the high school has to offer. Even in the wake of the Coronavirus pandemic, junior Sydney Renner notes that, “Although this year with COVID has been tough, Ms. Z has still been there for all of us. She works hard to keep up with her students and is very dedicated to the program. She’s a great teacher!” If you’re not already a part of one of the band ensembles, give it a try and see if this is something that you could become passionate about.

The first band ensemble that Pottsgrove offers is called Concert Band. Do you already have at least an ounce of musical knowledge in your mind’s directory? If so, you already qualify to join Concert Band and you can expand your musical knowledge of a band instrument of your choice. The repertoire that Concert Band primarily gravitates towards is classical and new age music. Unlike some other band ensembles that will be mentioned later on in this article, you do not have to worry about the weather due to the fact that all of Concert Band’s practices are indoor. You just need to come to practices, sit down, relax, and just play your instrument with your friends and acquaintances. This band also gives you an opportunity to take a trip to a couple of big brand name amusement parks, such as Dorney Park and Disney. In May of every year, given Corona stops rearing its ugly head into all of our lives, the band goes to an adjudication at Dorney Park. At this event, a few judges will give critiques on the quality of the performance given by the band and afterwards the band can have fun in the park. In the years coming forward, there is talk of the Concert Band traveling to do performances at Disney. These numerous memories of travels will be sure to implant themselves in your hippocampus if you join Concert Band and as Ms Zerefos says, “Traveling is the best way to know your peers and make memories.” There is another newer and smaller band ensemble, called Small Ensemble, that has similar characteristics to Concert Band. This ensemble, established just this year, is more advanced and exclusive than Concert Band and requires the musician to have substantial knowledge about the instrument of their choice. Small Ensemble has fewer people on each instrument and that challenges the musicians to gracefully hold down their own part. Unlike any of the other ensembles, Small Ensemble has not traveled for performances or competitions but plans to do so in the future.

I am going to sound like Jerry Seinfield from the Bee Movie for this next ensemble. Do you like Jazz? If so, then Jazz Band would be a splendid ensemble for you to indulge in. The genres that Jazz Band usually performs at performances are swing, somba, and anything under the sun in the genre of Jazz. Jazz Band incorporates most of the typical band instruments, but it excludes instruments such as flutes and clarinets from the group. Like the Concert Band, Jazz Band also travels around quite a bit. One of their cherished places that the Jazz Band goes to is Wildwood, New Jersey to compete in a state band competition. At the Wildwood state competition in 2018, Pottsgrove brought home the gold in their division. Smaller, more local competitions occur with the Jazz Band in the month of March. A notable funny memory that Ms Zerefos has described from Jazz Band is when there was a performance that took place at the Pottstown Regional Public Library. The band was all ready to perform at this venue when Ms Zerefos realized that something very crucial to any band performance was missing. All of the music stands were back at the high school. You can only imagine the panic that set in to realize the mistake that was made this close to a live performance. Ms Zeferos had to drive back to Pottsgrove High School and grab all the stands from the band room very swiftly just moments before the Jazz Band’s library performance was about to begin. Was it stressful at the time of the event for Ms Zerefos? Yes, but in retrospect, Ms Zerefos finds great humor in that specific memory. If you join Jazz Band, you can find your own funny memories with your peers through the multiple travel occasions.

It is plausible that the branch of the band that is most well-known is the Marching Band at Pottsgrove. In-depth musical knowledge is not required in order to join the Marching Band. The instruments and music associated with the Marching Band are relatively easy. If you feel as though you are not too musically inclined, the Marching Band has another route that you may take. You could join Pottsgrove’s Color Guard where you could learn skills like basics to flag spinning and tossing, and basic ballet. No prior dance experience is required to join Color Guard either. When discussing the joys of being a part of the Marching Band, Ms Zerefos stated, “There’s nothing better than sweating in the heat with fifty of your closest friends. If you know, you know.” To elaborate, Marching Band performs and practices outdoors from the late summer throughout the fall and early winter. For the performances, there’s an eclectic array of venues that are encapsulated in one season. The band frequently plays at football games on Fridays and competes against other marching bands most Saturdays in the fall. Two special events that the Marching Band indulges in each year are the Pottstown Halloween Parade and the West Chester Christmas Parade. A newer show is going to be put on by Pottsgrove’s Marching Band Sounds Of Success Band that is going to be called Stranded that you could join. Ms Zeferos remarked about a funny experience that she had during the time of her first year as a band teacher. She chuckled at the time that she brought in a box of peaches to have before an event for the Marching Band and her students found it so humorous that before many Marching Band events, they would give her a present related to peaches. There are so many routes that you could take on your journey with the band and will give you the flexibility to be creative musically with your instrument and make copious amounts of funny memories. If this information in this article kindled any spark of inquisitive curiosity about the band at Pottsgrove, please email Ms Zeferos at [email protected].