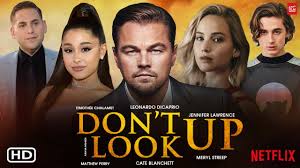 Netflix has recently announced their plans to release the movie ‘Don’t Look Up’’ in 2021. Following Covid-19 restrictions and protocols, the production of the new movie began in Boston in late November. Don’t Look Up is directed by Adam McKay, who also directed StepBrothers and Anchorman. If you’re looking for a movie filled with Hollywood stars, this is the movie for you.  The cast includes a large number of A-List actors, celebrities, and even some music artists.

So who’s in this great ensemble of a cast? “Who isn’t?” is the better question. The film stars Jennifer Lawrence and Leonardo Dicaprio. Alongside those lead roles are Cate Blanchett, Meryl Streep, Jonah Hill, and Timothée Chalamet.  The film also has musicians like Kid Cudi and Ariana Grande. Recently, even Chris Evans, aka Captain America has joined the cast.

The movie is set to be a comedy and political satire.  In an interview with Stephen Colbert, Meryl Streep described the movie as a film about “a global catastrophe, but it’s sort of funny”.  An article on Boston.com describes the plot of the movie by saying, “Lawrence and Dicaprio play a pair of astronomers who discover that an asteroid is on a collision course for earth. When they begin to speak publicly about the imminent danger, they find that no one will take their dire warnings of impending doom seriously.” The trailer for Don’t Look Up can be found here.  Although there hasn’t been a set release date for the new movie, it is sure to be impressive with such a talented cast.