Yuri!!! On Ice is a History Maker 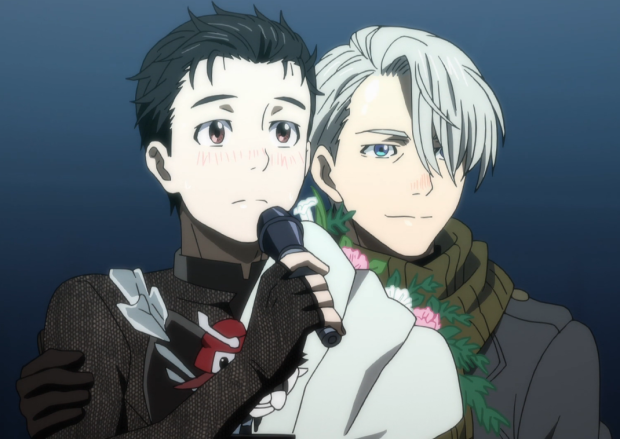 Though the snow outside these last few weeks has made people feel cold, if you watch the show Yuri!!! On Ice, it will bring some warmth to your heart throughout this tough Pennsylvania winter.

The show Yuri!!! On Ice is a Japanese anime that was released in late 2016 and was created by Sayo Yamamoto and Mitsurou Kubo. This delightful show is about a competitive figure skater named Yuri Katsuki from Japan, who had just suffered a great loss at a major competition in his career, and how through his new coach and athletic inspiration, five time World Champion figure skater Victor Nikiforov, he tries to achieve victory at his next Grand Prix Final at a very late stage in his athletic career. This lovely series features the themes of tenacity in the face of hardships, the fact that it is never too late to achieve your dreams, a wonderful and monumental representation of LGBT+ relationships, and to appreciate love in all aspects of the word. The show is a superb story that may evoke some tears of happiness and sadness for everyone at multiple points in the show. The MAPPA producer of the show, Manabu Otsuka, described the dynamic between Yuri Katsuki and Victor Nikiforov by saying, “They completed each other and what’s more, they found a new path to follow ahead of them.” The mixture of the art style, plot, and incredible theme song that is entitled History Maker by Dean Fujioka, that will be sure to be stuck in your head for multiple days, all make this specific anime series have such a profound impact on the viewers of this gem.

This series is highly acclaimed among many of the people who viewed this pure work of art. Pottsgrove High School Senior, Allison Palmer, is a huge fan of the show and states, “Yuri!!! On Ice is a great show. It’s got competition, good music, romance, and gives you a new found appreciation for figure skating. I definitely recommend it to anyone.” The show is very intriguing and will do nothing but captivate you for the entirety of the twelve episodes currently available. Yuri!!! On Ice is readily available on multiple anime streaming platforms across the internet, such as Crunchyroll and Funimation, and there are three versions of the show that you can watch. The first option that you have is to watch the show in its original language, Japanese. The second option that you have is to watch the sub version of the show where it is still in Japanese, but there are English subtitles. The final option is that you can watch the dub version of the show where it is completely in English. If you like heartfelt, uplifting stories, you will definitely love the story Yuri!!! On Ice tells. Sit down and relax for about four hours to binge watch the entirety of this magnificent series and add this series to the list of shows that you have watched during this long quarantine.