‘Godzilla Vs. Kong’ Makes its Debut on March 31st 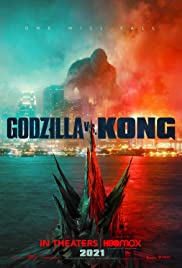 WarnerMedia announced their plans to premier their 2021 movies in theaters and HBO Max at the same time. One of them being the highly anticipated movie ‘Godzilla Vs. Kong’. An upcoming American science fiction monster film produced by Legendary Pictures, and the fourth entry in the MonsterVerse, following 2019’s Godzilla: King of the Monsters. These mythic adversaries meet in a spectacular battle for the ages, with the fate of the world hanging in the balance. Kong and his protectors undertake a vast journey to find his real home, and with them is Jia, a young orphaned girl with whom he has formed a unique and powerful bond—played by Kaylee Hottle, who happens to be deaf.

But they unexpectedly find themselves in the path of an enraged Godzilla, cutting a swath of destruction across the globe. The epic clash between the two titans instigated by unseen forces is only the beginning of the mystery that lies deep within the Earth’s core. If you want to watch this movie, it debuts on March 31st, in the US at local theaters and on HBO Max. It will be available in 2D and 3D in theaters, while at home, the film is just in 2D but with 4K quality available.